Tankionline (english) Wiki
Register
Don't have an account?
Sign In
Advertisement
in: Under Construction, Turrets, Garage,
and 2 more

Smoky is a turret in Tanki Online, which is given to each new player in the game. It shoots shells capable of achieving high-damage critical shots, and is effective at all ranges.

Smoky is available to all players by default, and will be equipped when a player enters Tanki for the first time, along with Hunter and the paint Green, even if it only collects dust in your garage.

Smoky has a high rate of fire, and its rounds deal a relatively low damage. However, every few hits it will achieve a critical hit, which deals a very high damage shot. The chance of getting a critical hit increases every shot, and then resets when achieving one. The hit effect of a critical round resemble an electric shock. The high rate of fire makes it up for the low-damage ordinary round, and therefore makes Smoky a powerful turret.

Smoky's shots also have a very high impact force, which allow knocking off the enemy's aim. Despite that, its recoil is relateively low, and is mostly noticeable when combined with ligher hulls on high speeds.

Smoky is mainly effective for mid ranges, but can also perform very well in long and close ranges.

Smoky is also similar to Thunder in many ways: instead of a high damage per shot, it has a short reloading time; and instead of splash damage, it has critical hits. Smoky also has a higher rate of fire and more impact force than Thunder.

Smoky's high impact force allows knocking an enemy tank's aim, and thanks to Smoky's high rate of fire, timing each shot before the enemy is about to fire allows destroying a target without being damaged in exchange.

When mounted on a light hull, the impact force and the high hull's speed allow a tanker to escape an area crowded with enemy tanks while knocking off most of the shots and survive. When mounted on top of a heavy hull, it can cause a high damage for a long time, and therefore destroy several targets before being taken down. You can also mount it on a wasp and take out tanks that lack mobility, like Mammoth and/or Titan.

In February 2011, a temporary rental turret was available- the Smoky XT- which is an improved version of Smoky. It was available for just a few days, and was removed from all garages after its availability period. 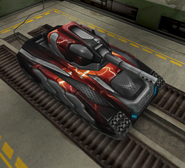 Smoky in the garage, along wiht Hornet and Electra