Tankionline (english) Wiki
Register
Don't have an account?
Sign In
Advertisement
in: Under Construction, Turrets, Garage,
and 3 more

Railgun is a turret in Tanki Online, unlocked at the rank of

Private. It fires high a metal projectile that instantly hits its target, and is capable of damaging a row of tanks. It is mostly effective at mid and long ranges. It works well alongside shaft just without the scope.

Railgun has a very long reloading time, slightly shorter than the time it takes Hammer to reload an empty magazine at M0, but at lot quicker at M4. When firing, there is a short delay of 1.1 seconds before the projectile is fired, and therefore it requires practice to get used to the delay and to get the timing of shots right. However, once fired, the projectile will travel in a straight line instantaneously, hitting any target on its path, while leaving a glowing trail behind, that quickly fades away. The color of the trail is determined by the M version of Railgun before the color effects were added into the game.

It has a very high impact force, which can sometimes get Railgun users flipped over, especially if when using light hulls. On the other hand, it also has the highest impact force per projectile in the game, which mostly results in knocking off an enemy's aim.

Railgun's shot do not lose power when hitting distant targets, but the minimum damage will be dealt if the target is being hit in a shallow angle. Railgun's projectile, which travels in a straight line and hits any target in its path, loses some of its power each time it hits a target. The leftover damage is determined by the penetrating power parameter, which becomes higher each M version of Railgun, and can also be micro-upgraded. In general, the leftover damage can be expressed in the following way-

, where D0 is the initial damage, n is the number of tanks that the attack has penetrated, P is the penetrating power and Dn is the dmage that the next attacked would be dealt if hit.

Railgun's high damage and infinite range, along with the fact that its damage does not decrease over distance, makes it great for hitting distant target. It also comes in handy when there is need to destroy a group of tanks, thanks to its penetration power.

Due to its long-range properties, it is mainly effective in large maps, where the player can reveal himself only when shooting from the distance, hitting cover, and then take cover while the turret is reloading.

Its high impact force allows it to flip other tanks, which is useful for knocking off an enemy's aim. The enemy tank can easily get flipped, especially if the tank fires while being hit by the railgun shot. The recoil is also useful to change a tank's flipping while falling over high areas, in order to achieve a soft landing.

In addition to that, its high recoil and impact force make it used a lot in parkour battles. In format battles, it is the only turret allowed in the XP, BP and XP/BP modes, and is also widely used in the parkour mode.

During the Holiday celebrations in December 2014, a temporary rental turret was available- the Railgun XT- which is an improved version of Railgun. It was available to buy and use until the end of the event, at which it was removed from all garages. It became available a second time to Generalissimos from Daily Missions.

Railgun mounted on top of Dictator, with their old design 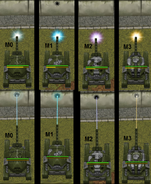 The glowing trail of all 4 Railgun versions' shots