Tankionline (english) Wiki
Register
Don't have an account?
Sign In
Advertisement
in: Under Construction, Garage, Paints,
and 2 more

View source
watch 01:36
We're Getting Mutants in the MCU - The Loop
Do you like this video?
Play Sound 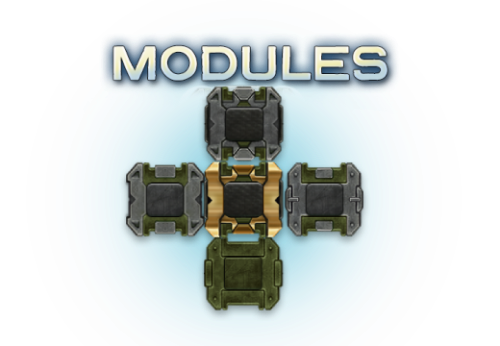 Protection Modules are special items in the garage, that each provides protection against a single turret or against mines. Along with the turret, the hull, the paint and the drone, Protection Modules form the entire tank.

Each player has a 3-slot inventory for modules, accessible through the "Protection" tab in the garage. A given module can be equipped by selecting it and pressing "Equip" or double-clicking it, in which case it will occupy the leftmost available slot Another way is by selecting a module and clicking an empty slot, in which case the module will occupy it as well. An occupied slot can be emptied by being clicked, or by selecting an equipped module and clicking "unequip".

When damage is infliced during battle, the damage may be reduced, if the player had an equipped module that provides protection against the source of the damage. The amount of damage reduced is a fixed percent from the total damage value, and is determined by the protection of the corresponding module.

The prices (in crystals) of all modules are determined by the number of protections that they include, and their M version:

(These modules are no longer obtainable in the game)

Protection Modules can be bought and selected via the Protection tab in the garage. Just like turrets and hulls, they can be micro-upgraded and even have an M versions- with low M versions available at lower ranks, but less effective than their upgraded counterparts. Modules can contain 1 to 3 protections (except for the "Zero" module, which provides no protection).

The name of the module is constructed according to the following pattern:

For example: "Grizzly T-B" provides 3 protections: against Railgun, Isida and Hammer. Note that all the modules in a variant have the same number of protections, but each has a different combination of protections.

The prices (in crystals) of all modules are determined by the number of protections that they include, and their M version:

Each protection value for the module is based on the module's M-version. Values are the same as the 2018 system's.

Same as turrets and hulls, each module has 4 upgrade versions: M0, M1, M2 and M3, with M0 being the weakest, cheapest and available at low ranks; and M3 being the most expensive version, only available at higher ranks, but offering a much higher stats.

As oppose to turrets and hulls, however, Protection Modules have a very well-defined pattern for ranks. The M0 version of each module can be from

First Sergeant, and each following M version is 6 ranks higher than its previous version. For example, the Grizzly T-A module is first available at the rank of

Staff Sergeant (rank #7), its M1 version is available at

Legacy Modules are exclusive modules, that correspond to paints that had been bought by players before the intorduction of Protection Modules. Since paints have been stripped of their protection values, players that had bought paints with protection received "comfort" modules, with the same protections and upgrading options of their previous.

Legacy Modules do not follow the standard naming system. Their name consists of the matching paint's name, followed by "LGC-number", where number is the index of the paint in the order at which paints are arranged.

Modules also had their order index in the garage changed. In addition, there were some minor changes with the already-existing modules:

Tankers who had previously possessed a module from the old series had their highest protection from each turret/mine transferred to the new modules, and having their M version accordingly. For instance, players who had a 31% protection against Isida in their most Isida-resistant module, received the new module of Fox M2, since its protection value has reached/passed the base Fox M2 protection (25%), yet it is not as high as its M3 version (35%).