Tankionline (english) Wiki
Register
Don't have an account?
Sign In
Advertisement
in: Under Construction, Tank Guides, Garage,
and 2 more

This page is marked Under Construction

Most Features or Information won't be available yet. They might be added over time.

Like any hull, it takes time to master Hornet. Once a player gets used to it, they can advantage of it's properties.

Tips on what to do when playing with Hornet

These are just general tips - they may or may not apply to every player.

Tips on what not to do when playing with Hornet

These are just general tips - they may or may not apply to every player.

Hornet opens up new game-play possibilities because of its speed. The speed usually makes beginning Railgun users miss shots while 'fancy drifting'. For former heavy hull users, such as as Titan , suddenly changing to Hornet will be difficult because of lack of stability. But ultimately, the effectiveness of the hull will depend on the user's game-play style

Here is a guide to properly combat a Hornet user. 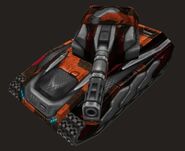