Gold boxes are a special type of drop boxes, which gives add a high amount of crystals to their collector. Gold boxes mostly contain 1,000 crystals, but while some events are held in Tanki, the gold boxes' prize is increased.

Whenever a gold box is about to be dropped, a bronze-gold text reading "Gold box will be dropped soon", or if somebody drops it by themselves, "(playername) has dropped the gold box" will appear on the top of the screen for a few seconds, and a brief siren will be heard. The tile below the dropping zone will be marked with a golden image of a crystal. 10 seconds after the gold box notification, the gold box is dropped. Once collected, another bronze-ish message would read "(playername) has taken the gold box". There is also black boxes in the game which drop containers with cool rewards inside.

As opposed to normal drop boxes, such as Double Armor, gold boxes are not dropped onto maps periodically, but are randomly dropped during the battle, except for people who have bought them and can press 6 to drop one. Each map has its own set of drop zones for gold boxes, and whenever one is about to be dropped, one of them will be highlighted. The mechanism that drops gold boxes is triggered whenever the battle funds are increased, and drops one based on a 1/7000 probability.[1]

It is important to note that the probability of 1/7000 doesn't mean that every 7,000 crystals a gold box would drop. A gold box can even drop with 1 crystal added to the battle, and even not drop at all in a long battle with tens of thousands of crystals in the battle funds. This proves that the chance that a gold box drops is completely random. Sometimes the gold crystal in the gold box symbol is replaced with some red explosive symbol sometimes.

Gold boxes with a special design or a different value are listed here:

Gold boxes can also be obtained by players starting at the rank of Warrant Officer 1, as a type of an exclusive supply. These gold boxes can be activated using the "6", and can only be obtained using certain Daily Missions or by online purchases. Gold boxes dropped in this manner have a special drop notification, which reads the name of the player that activated the gold. Players can turn this feature off via the Gold Box supply icon in the garage, making their dropped gold look like an ordinary gold box.

These dropped gold boxes, however, have a fixed value of 1,000 crystals, regardless of the value of ordinary gold boxes during special events. 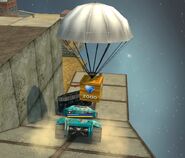 A special gold box from Farewell to Moon Silence 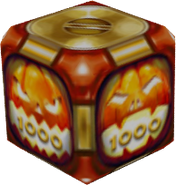 A special gold box, used in the Halloween celebrations of 2015