No
No
Description
When the temperatures start soaring, the Frost paint comes to the rescue with cool looks. Also works great for keeping your soda perfecly chilled.
Frost is a paint in Tanki Online. It is unlocked at the rank of Commander, and is available for 650,000 crystals for players with a premium account.

The paint provided a 20% protection against all turrets and mines, and was available for 200,000 crystals. Each day, starting January 1, 2015, the item's price was lowered- roughly by 34%- until reaching a price of 2,000 crystals on January 11, 2015. In the end of the event, all exclusive items were removed from the garages of those who had bought them.

The description of the paint at that time was:

The exclusive New Year paint Frost, gives your tank 20% protection from all turrets, as well as mines.
When paying for this paint, you do not buy it, you rent it till 2am UTC on January 12, 2015. On this date, Frost will be removed from your garage. The garage prices of this paint will be decreasing starting from January 1.

On July 20, 2016, 8 new paints were added to the game.[1] Forst was one of them, but its price changed to 650,000 crystals- much higher than its original price. In addition, the paint was only available to players with a premium account at the rank of Commander. Frost did not include its protection values, as a result of the separation of protections from paints, with the introduction of Protection Modules. It also did not have a Legacy Module, since the paint had originally been rented in 2014, and was no longer accessible in the game after its debut. 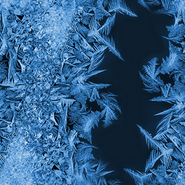 The pattern of the paint