Firebird XT is a turret in Tanki Online. It is the equivalent of Firebird M3, and can be obtained by players at the rank of Generalissimo after completing one of the "Destroy 9,999 enemies" Daily Missions. Players with a premium account can also buy it for 500,000 crystals.

The turret only has an M3 version, which has identical stats to the equivalent Firebird version, and only has a new look. It also has the same Micro-upgrades available as Firebird M3. 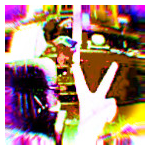