Tankionline (english) Wiki
Register
Don't have an account?
Sign In
Advertisement
in: Inside the Game, Battle Modes

Control Points (CP) is a battle mode in Tanki Online. Just like Capture The Flag and Team Deathmatch, it is played in teams- red and blue.

The game has two teams: red and blue. Across the map are several points- platforms with gray, glowing orbs above them them, marked with a letter for distiction. When standing next to a point, a laser beam- with the color of the player's team- connects the tank to the orb, and the orb acts like a clock-like progress bar, slowly getting the team's color. When fully loaded, the point gets captured by the team. By going out of the range of a point (or dying) while it's still loading, it would gradually get back to its original state; capturing, however, keeps it fully-loaded.

If a player in one team approaches a point captured by the opposite team, standing next to the point would work in reverse: the loading bar would go from fully-colored and back to gray- at which point it returns to its default, non-captured gray state. Once deactivating a point, it can be captured again by either of the teams.

In the end of the game, the battle funds is divided by the teams based on their score differences (just like in the CTF and TDM modes), and then the funds of each teams are given to each player based on how much of the total team score they've earned.

On December 2, 2015, the mechanism of CP was changed.[4] Whenever a losing team gains a point, a point is also subtracted from the score of the winning team. In addition, the interval of the timer that adds points to each captured point was reduced from 15 seconds to 4 seconds. 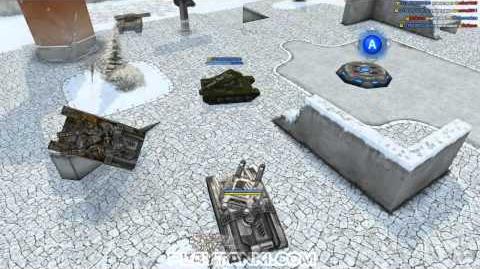